“[A] short and witty point&click in which you’ll follow the story of C432632, a finicky grey cube that sure doesn’t want to miss his favorite TV show. In a media-driven society in which nothing else matters but TV, will our hero wake up and understand the world he lives in is far from perfect?”

In May 2018, the one-man-studio GOLOSO Games and Philip Aldous contributed a remarkable entry to the Adventure Jam 2018: “Antenna dilemma”. The story about a world full of cubes which all seem to have a television addiction was able to score the third place overall in the popular jam. Now, not even one year later, the story about the cube C432632 and his sudden companion, a sphere named Alfred, is back on track. But what changed? 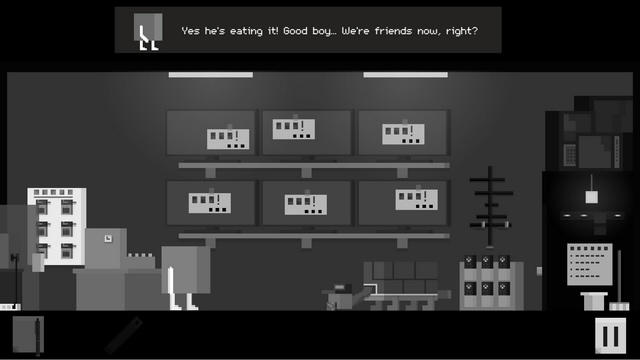 Well, the content of the new version is almost twice that of the original. The first half of the game’s storyline is nearly exact the same as the old game: We see C432632 to be an obedient citizen. He glorifies his leader, a mysterious figure named The Dice, he loves his television shows more than anything else in the world and the world appears in the non-brightest shades of black, white and grey. But one day, something crashes on his roof and destroys his antenna, so he can’t watch his favorite shows anymore. So we as players spend the first time of the game to figure out how to replace the antenna, we learn about the sets of rules in C432632′s world (like law F8.23: “If doing something bad will allow you to watch a TV show on time, then you can do it, provided an excuse note is left on the scene of crime.”) and we have to solve little, often funny puzzles meanwhile. 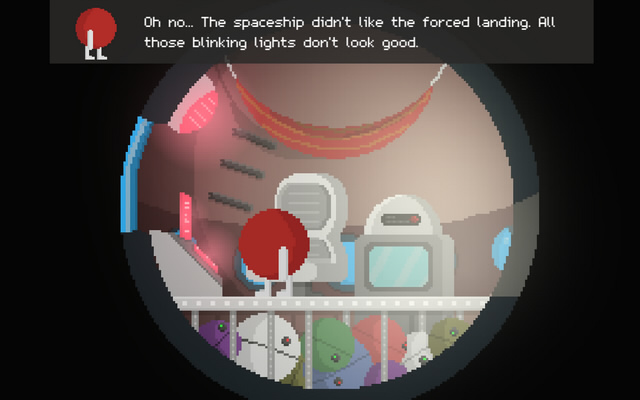 But when our cube friend is ready to attach the replacement antenna, we are slowly sliding into the new parts of the point’n’click adventure. We don’t just meet Alfred and quickly go with him to the ending cutscene, but we can see more of the world out of his perspective. While one assumed in the first version of the game Alfred to be some kind of explorer, we learn here that he’s an ambassador on a peace mission. And while he’s on the right planet, there’s just tiny little problem: He’s on the wrong side of it. So he crashed down on the building and did a major damage to his spaceship. Alfred is hoping that C432632 will help him out and lead him to the cube people he actually was expecting to see, but the grey cube refuses to do so and calls them ‘traitors’.

And that’s actually the most amazing part of the re-release of “Antenna Dilemma” for me: GOLOSO Games and Philip Aldous expanded the background story of the game world, so that it’s now more interesting and teasing. For example, they mention a group called the ‘Boxiteers’ who want to leave the Union with all its beautiful televisions (hello there, Brexit!). The ‘traitors’ seem to be a prototype movement for the ‘Boxiteers’, as they have escaped the Union hundreds of years ago after a long, raging war and are even now still hiding in the mountains. And the government also is not as faceless anymore: To establish The Dice as the imperious leader of the colorless world was a great choice, especially thanks to a little revealation in the end.

But even with all these narrative additions, the overhaul of the user interface and some new puzzles, “Antenna Dilemma” stays to be a teaser. It’s not an adventure game with a complete storyline, at least not yet – but it’s the complete first chapter for a game series. It continues to be surprisingly charming, it includes new sweet and witty puns and the hunting for the ten achievements in the Steam version is hilarious as well. 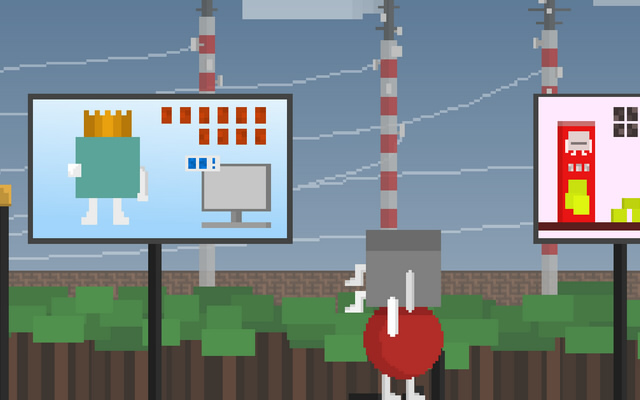 So don’t be too disappointed, when you wanted to download and play “Antenna Dilemma” in the hope to disclose each secret of C432632′s world. Just be happy that such a game exists (for free, by the way!), and with it the possibility to evolve into something even bigger! Let’s congratulate GOLOSO Games and Philip Aldous for their hard work paying off and together we may be able to motivate them to do “Antenna Dilemma – The full series”. Now that would fire up the ratings. And that would be what this sweet gem of a game deserves.

Pay what you want