Yeah, we know, we know: For most online magazines “Super Mario Odyssey”, “The Legend of Zelda: Breath of the Wild” and “PLAYERUNKNOWN’S BATTLEGROUNDS” are the Games Of The Year 2017. And sure, those are great games, but who thinks about all the amazing game jam entries of 2017? Well, we do! That’s why we created a list of 40 game jam games, sorted by eight categories, just like last year.

So, come on and let’s celebrate the amazing creative output of the year 2017 together!

“The Treachery of Game Dev” by Friedrich Hanisch & Chill Carrier.

One part “Snake” clone, one part puzzle game, one part meta game – “The Treachery of Game Dev” is a wonderful combination of different games and feels like it could be a part of “The Beginner’s Guide”.

Read more about “The Treachery of Game Dev”.

With all its different mechanics is “The Deep” one of the most complex and interesting jam games of 2017. The ‘translation’ of analogue movements into game mechanics is top-notch.

Read more about “The Deep”.

The concept of “Signal?” is based on a time-rewinding mechanic, which will help you to explore each part and the rhythm of your hostile, glitchy environment.

“Path of the Rabbit” by Daniel Linssen​.

While “Path of the Rabbit” is played on a very small game board, it can get pretty difficult thanks to the tile-stacking mechanic. This way, its players need to be foresightful and focused to win.

Read more about “Path of the Rabbit”.

”Definitely Real Football” is one of the most goofy sports game in the whole history of jam games.

“Dungeon In a Bottle” by Joe Hanna & Andrew Jones.

In the frustrating and at the same time awesome “Dungeon In a Bottle” you have to walljump for your life, but not just to avoid something, but to also alter the level itself. And damn, that feedback feels so good!

Read more about “Dungeon In a Bottle”.

Fly, little birdie, fly! The controls in “air mail” feel so smooth, that you won’t like to stop to fly in circles and all over the little world!

In “Goblins 2 Go” you just have to find the right proportions of eight different potions to create a goblin, which should fit the needs of your customers. A simple and neat concept well executed!

By placing different musical plants on this planet, you can create some sweet beats and sounds. That’s why it’s so much fun to try out the different combinations in “Planetone”.

You can find an impossible high amount of such high-quality images in the wonderful “HE BEAT HER.” – the whole art style of its developer is absolutely gorgeous.

Read more about “HE BEAT HER.”. 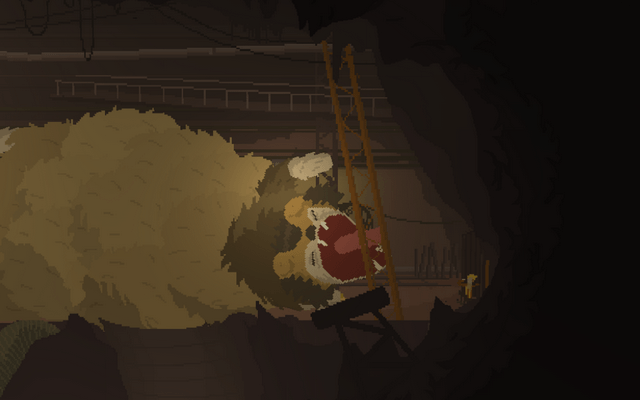 Sweet pixel art for a giant monster? Sure, in “Den” you will see exactly that.

“The Lights Were Off” by Franklin’s Ghost.

The explicit choice of neon colors in combination with the motion animations gives “The Lights Were Off” an unique art style that we felt we have to honor with a place on this list.

Read more about “The Lights Were Off”. 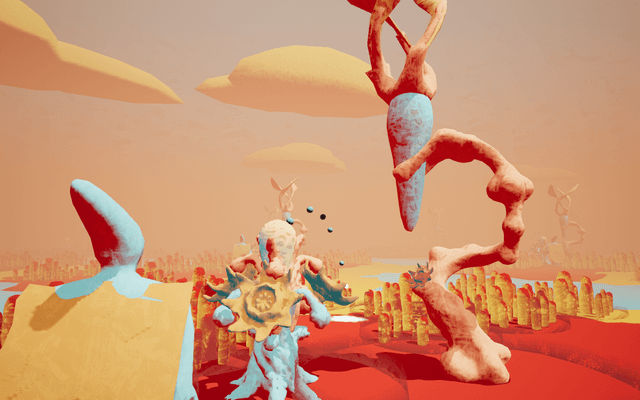 In “GardenGarden” you’ll be the master of a clay world, which wants to be filled with whimsical formed plants. A stunning art choice.

“iD” is another jam game of the year 2017 which was made with some excellent pixel art. The level of detail is breathtaking.

What makes the storytelling in “Wake Up” so special is the rhythm of its narration, which is perfectly timed with each action in the game itself.

Read more about “Wake Up”.

The usage of different TV programs in “Between Stations” to tell something about the inner life of the character is a clever and creative way of storytelling.

Read more about “Between Stations”.

The serious topic of “A Mind Is A Small Place” – mental health problems – gets told with the help of the unsettling game world. A little masterpiece.

Read more about “A Mind Is A Small Place”.

“The Cat In The Hijab” by Andrew Wang.

In “The Cat In The Hijab” you will face daily racism as well as islamophobia – but it will be in your hands how to react to it. An informative as well as empathy rising game for the good fight.

Read more about “The Cat In The Hijab”.

“and i made sure to hold your head sideways” by Jenny Jiao Hsia & AP Thomson.

In “and i made sure to hold your head sideways”, the genre form of the game is a narrative strategy to tell the story itself, which is absolutely fascinating. The creation and ‘destruction’ of the images and their context lets the player feel very involved, although it’s basically an interactive ‘wimmelpicture’.

Read more about “and i made sure to hold your head sideways”.

Want to be kind, want to be cute or want to be cheeky? “Pip Sweep” has the perfect puzzles for you, because you don’t have to solve them all and each of them will need another kind of solving approach! The different types of interaction with the game world are just hilarious.

While the kind of puzzles are pretty classic sorting stuff (’A doesn’t like B and wants to stand besides C, while C also wants to stand besides another C, yaddayadda’), the whole amount of levels in “Smalltrek” is absolutely insane and it features a great learning curve as well as different kind of characters / puzzle elements.

If you really want to find out all of the eight endings of “(Un)Marked”, you’ll have to be creative about your play style. Violence is an option just like pacifism, but other things should also be considered. A well designed puzzle game!

While the puzzles in “Snail Island” aren’t that difficult, the game needs its players to be observant about its world.

“You’re Winding Me Up Harvey” by Lewis Tolonen.

In “You’re Winding Me Up Harvey” the player needs to have a good sense of timing as well as space, because certain puzzle elements in one room might influence some elements in another room. The whole design is a little joy anyway, and if you like one or two brain-twisters, then that one is for you.

Read more about “You’re Winding Me Up Harvey”.

“Wonders between Dunes” by Moshe Linke.

With its brutalist world architecture and all the monuments, “Wonders between Dunes” is a paramount example for the statement, that certain kinds of world designs lead to certain kinds of atmosphere. A simply amazing exploration trip awaits you.

Read more about “Wonders between Dunes”.

In the cyberpunk simulation “Ignorance is Bliss” you have the power as well as the burden to be part of a nearly omnipotent surveillance machinery. But the relevant data could occur anywhere and anytime, which gives the whole game a certain ‘wickedness’.

Read more about “Ignorance is Bliss”.

Thanks to the steady uncertainty what exactly is happening in “Engolasters January 2021”, a strange feeling is the constant companion of its players.

Even if it features sometimes kind of goofy moments, “Peridium” has an always present grim atmosphere, which never breaks.

What makes “DONATA” so remarkable is the fact that you have to interact with the game in unusual ways to understand it in its entirety. Simple playing isn’t enough.

It all starts off as some weird, silly fun, but to find the path out of your illusions is the last difficult thing on your “To do list”.

In “Senseless” you’ll be confronted with your expectations in a pretty funny way. A special type of ‘ego shooter’, so to speak. 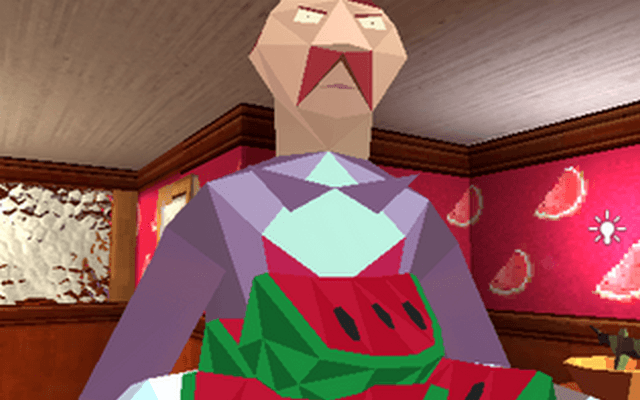 “Melone in the Dark” by Marius Winter & Nick Maierhöfer.

Read more about “Melone in the Dark”. 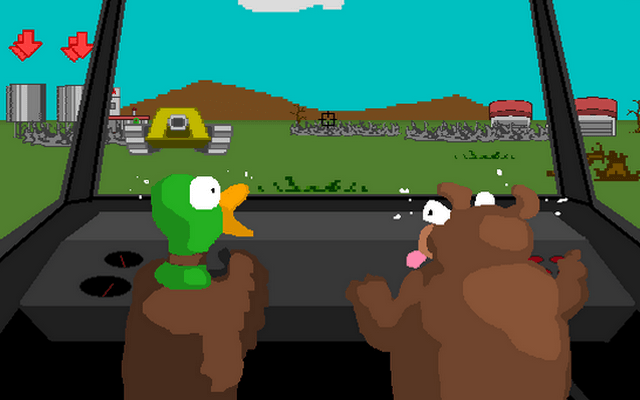 “Stop That Tank!” by Mike MacDee.

“Stop That Tank!” is like a wacky version of “Battlezone”, but with a duck and a dog in the cockpit!

Read more about “Stop That Tank!”.

“The Treasure of Loch Inch” by Simon Reid.

Besides the good ol’ pixel art, “The Treasure of Loch Inch” follows a humorous puzzle design which may remind you a bit of the “Monkey Island” series.

Read more about “The Treasure of Loch Inch”. 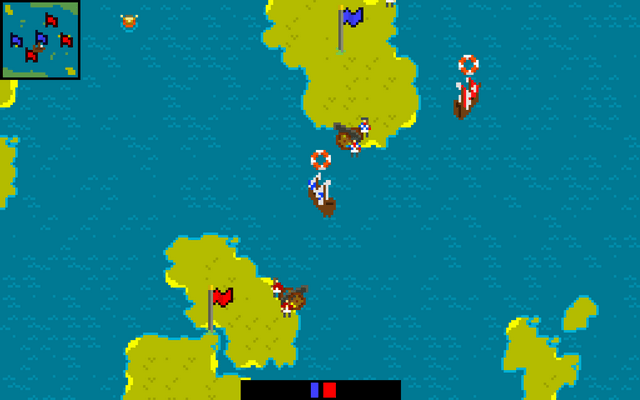 With its straight-forward ‘Who owns more islands wins’ concept and its old-fashioned art, “Retro Island War” definitely deserves a seat at the nostalgia table.