“[A] cyberpunk narrative experience about fate and happiness featuring the extensive use of pottery, bartending and impersonating people on the phone to take down a corporate conspiracy.”

Fate versus free will. Determination versus rationality. Chaos versus order. “The Red Strings Club” is a stunning gaming experience which wants you to take three hours to think about all these topics. But there’s one single question, that just you can answer in the end: Can you connect all the dots of its narration?

“What do you mean by that?”, you might ask now. 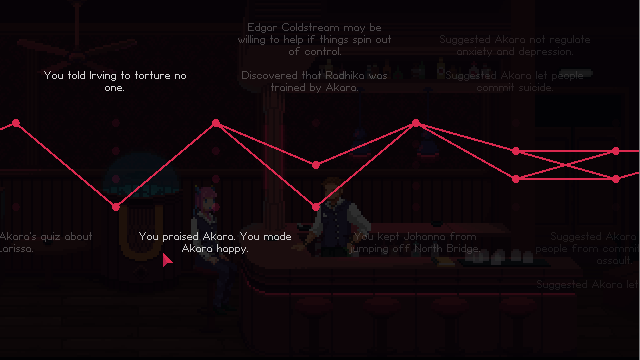 Well… Let’s get to the beginning. You will get involved in different tasks, as you take up the roles of different characters. There’d be Donovan, for example: He’s the bartender of “The Red Strings Club”, a dubios, but charming underground bar. His skills and the help of the cocktail mixing muse allow him to create the most amazing, literally mind-blowing drinks ever.

He achieves that by mixing up different liquors in such a way that they trigger a specific emotion. The triggers are visualized by the so called ‘Soul Nodes’ of a customer. Whenever the effect of a cocktail hits the sweet spot, the mood of a person will become the one of the specific ‘Soul Node’. Creating a relaxing atmosphere? No problem. Want your customer to be afraid? Sure, why not.

“But why would Donovan do that?”, you might ask now.

Well, that’s a good question. In “The Red Strings Club” a giant corporation named Supercontinent Ltd. tries to get a product out which would affect the complete mankind with far-reaching consequences. Donovan on the other hand is a well-meaning information broker and tries to help his friend Brandeis, a young aspiring hacker, to take the whole thing down. And how Donovan wants to do that? Exactly, by getting out secret intel via little chats in his bar with the help of his cocktails.

And what does Brandeis? He becomes the main character in the end of the game and based on Donovans collected information, he is able to break into the headquarters of Supercontinent Ltd. There he will encounter an ancient technology: A landline network, just usable for the workers of the seemingly evil corporation. By perfectly imitating all their voices (regardless of the gender of their owners) he can get more intel to find a way to destroy the new product. But Brandeis isn’t a master in disguising his voice, no no… He gets help by the android Akara-184.

But one day there was a break-in in the implants factory. The rebel Ariadne of the group PROXYMA disguised herself as a customer and was able to get Akara-184 to produce a new, self-designed set of implants… Those new implants are able to break a humans belief in authority and rules, they could even rise up a humans empathy! But as soon as Supercontinent Ltd. found out about the incident, they got rid off Ariadne and tried to shoot Akara-184 down. She was able to escape and hided then in the bar. There she becomes an ‘employee’ of Donovan and helps him as well as Brandeis in their revolutionary plans in the mysterious cyberpunk city. 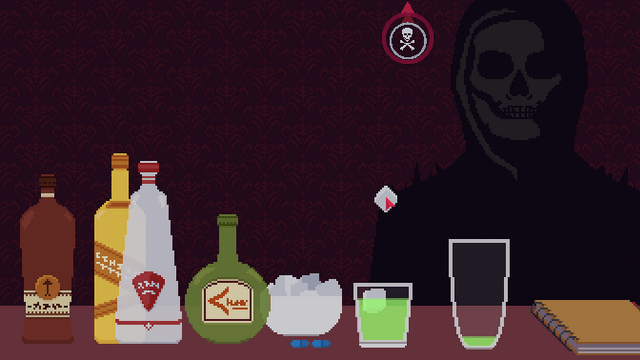 Oh no, don’t worry. Believe me when I tell you that I didn’t spoil too much. Even though “The Red Strings Club” is a pretty ‘small’ game (you will just need three to four hours for a full playthrough), there’s a bunch of storylines and hidden details that I haven’t even mentioned so far. Everything is connected with anything and each of your actions could have enormous consequences. It’s like the butterfly effect in the form of a game, so to speak.

But even here there are some loose ends, which isn’t a bad thing at all. It adds up to the whole atmosphere. Like the weird smuggler named Gost, who just appears in the middle of the night and seems to be an unreal entity. He can get you anything you want (besides weapons or people), but he doesn’t explain how or why he does that. His first appearance felt super intense to me.

“But wait… Pottery, mixing drinks, getting intel via a landline network, ghost smugglers… What kind of a game is “The Red Strings Club” after all?”, you might ask now. 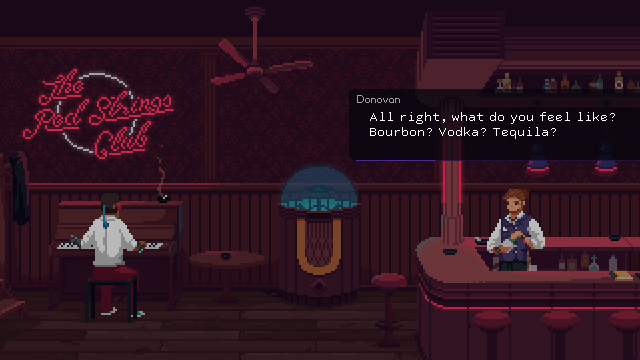 It’s a surprisingly well working mixture of genres with a delightful, philosophical story! And in a poetical way you could even say that it’s a metapher for our life: It’s a series of different experiences which may seem to be not connected at all, but in the end you can see that your past actions have huge impacts on your present and even your future. Even weirder, the history of this game is an excellent example for that, and the game jam culture is an essential part of it!

The pottery part? It’s an expanded version of Deconstructeams Ludum Dare 35 entry “Zen and the Art of Transhumanism”!

Heck, there’s even a reference to the “Ages of Irving”, the Ludum Dare 24 entry of Deconstructeam, which came out August 2012! His grandson Irving III. appears as a young freelance torturer in the new game. And who knows, maybe that reference is not the only one…

“So “The Red Strings Club” is a bit of a cocktail itself?”, you might ask now.

Yes, indeed. The different experiences and achievements of its developers in the real life affected it tremendously. All the little fragments transformed into something bigger, into something wonderful even. Overall, “The Red Strings Club” is a fantastic composition, guided by a really amazing soundtrack and lovely pixel art.

So… Allow me to ask you a question now: Why don’t you just grab this game as well as a cold drink and enjoy both? Donovan, Brandeis and Akara-184 are already waiting for you.