The Ludum Dare celebrated its 15th birthday with the 38th edition! Over 2.900 games were created from April 21st to 24th, all under the same theme: “A Small World”. While we already recommended a bunch of entries the last few weeks, Sebastian Standke wrote an articles series about the several different approachs to the theme. So come on and join us in discovering the various representations of “A Small World”! The first part of our little close-up series starts with small planets and the limitation of the players view.

Very often the participants of the 38th Ludum Dare thought of small worlds in a sense of small planets, so that many games with a space setting were created. I mean, that’s quite an obvious idea, right? Anyway, some of those planet games were heavily relying on physics-based game mechanics, for example “Techium Eclipse” and “In Good Hands”. In both games you have the same goal: You have to protect your planet from falling meteors and you do that by rotating the whole planet itself.

The little physics ‘anti-shooter’ “SLINGSHOOT” also is a part of the physics-planet-games, but it’s working in quite another way. Here aliens are trying to shoot you and also there are a bunch of asteroids, but by moving your planet close to the bullets or celestial bodies, you can manipulate their way, so that they destroy themselves eventually. As you can see, the goal of protecting a planet was a pretty common one. Another good example for that is the entry “Tiny Defense Planet”. It’s a simple defense-shooter with a bunch of laser weapons and shields and other stuff, where you have to fight against space-dolphin-alien-things in best retro fashion. 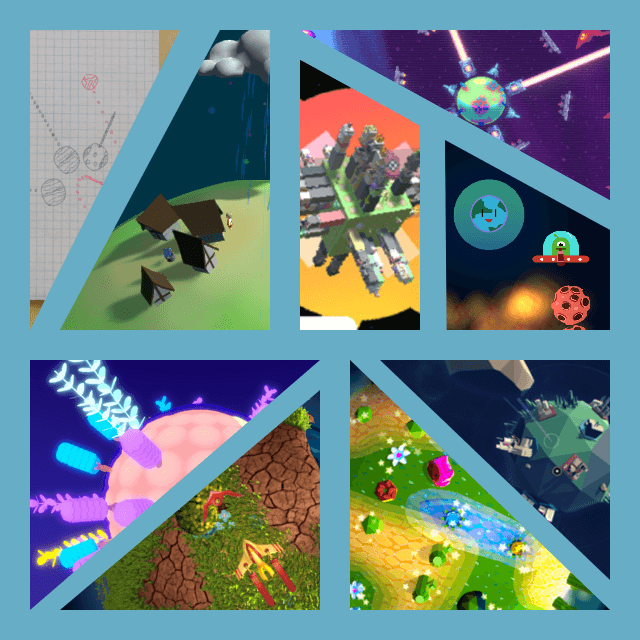 But violence, action and protection aren’t the only core motifs of those games. Actually, there’s a bunch of planet games which were kind of relaxing. In “Blomst 🌻” you have to terraform different heavenly bodies by planting different flowers on them and in the atmospheric “Floraison” you even vitalize barren environments just by your movement!

But what I really loved were the little rhythm and music games about planets. In “Planetone” and “Orchardstra” you plant different kinds of seeds on your world and by doing so you ‘compose’ your own melodies. I find that kinds of interaction exciting, because you have to learn about the functionalities, dependencies and structure of your little world to create something beautiful. But hey, if you’d rather like some silly planet fun, why don’t you try out a round of “Interplanetary Billards”? There your billard balls are – who would have guessed – tiny planets, who have get sucked in by a black hole. But take care that you don’t vanish…

But as we all know, planets are originally big worlds in general. We could wander on our Earth and explore it for years. With that thought in mind, some developers tried to use big planets as small worlds by limiting the players view on them. A great example for that are the puzzle exploration games “Bunosphere” and “Pip Sweep”. In both the players can just see a tiny part of the whole environment, so that they have to remember specific locations and the way to them to solve the several puzzles successfully.

The linear shooter “Monolith” also allows its players just one only way to triumph over the enemies. Each encounter is well planned, the view has to be focused on the hostile units – literally, because you can’t shoot on them without looking in their direction for a longer time. 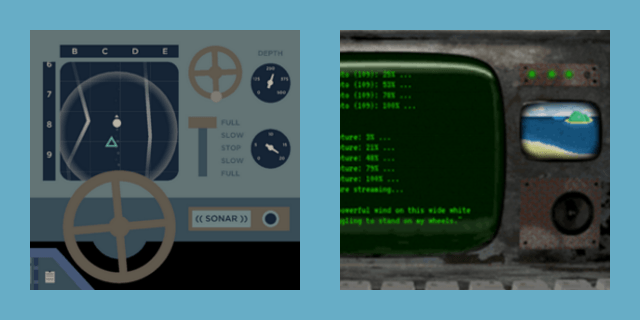 Another way of limiting the players view of the game world is by letting them interact with it via an interface. For example, in “The Deep” you have to complete different tasks (like mining minerals and chasing away dangerous leviathans) for your employer in a submarine. The vehicle itself is a poky place, where each room has an explicit function: There is a navigation room, in another room you have the control over the hatches, et cetera. So your possibilities to interact with the external environment are splitted, which allows the game to generate an illusion of a small world, while it’s actually huge.

An additional interface an be found in “Pod2000”: Here the players have the full control over a rover robot with the help of a console. By executing different commands, the robot will be told to go to different locations of the unknown planet. Whenever the arrives on a new place, he can explore it for a bit – then he will send pictures and audio files, which create an excellent atmosphere. Just by hearing and seeing what he hears and sees, we can build a connection to the planet and him. We always just get tiny parts of the whole world, but they still mean something.

How else can game makers limit the view of their audience? Correct, they can hide the game world and reveal its whole grace bit by bit. Most games with dungeon settings like the roguelike RPG “Paisley Princess” do exactly that. Each new (and truly tiny) room of its dungeon can be just explored by getting deeper and deeper into it. Each floor means a whole new environment with different kinds of monsters and rooms to explore. The game may be just some pixels wide and high, but the game world itself is surprisingly big.

The ambient puzzle-’platformer’ “The Shifting Catacombs of Mu’ralagh” shows its ability of hiding the world off in an even more spectacular way. The character here never moves from one screen into another, but by solving little switch puzzles and succeeding in reaction challenges the player can explore new rooms of the catacombs. A wonderful experience.