While I already pointed out the importance of planets as environments and characters in the first part of this article series, I want to show another usage of planets in the entries for the 38th Ludum Dare: They can be the whole motivation of a game. There’s a bunch of games where you have to take care of a new world.

Many entries tried to focus on the creation of a planet. For example, in “A Small World: Planet Creator” you have to gather dust, rocks and water to give birth to a new planet. Meanwhile you have to deal with an existing Earth in “Your World: A Delicious Earth Caring Simulator!”. By ‘feeding’ it humans, science, plants and other stuff, it becomes habitable. In such games we get a small part of a later bigger world and help it transforming into a wonderful place for any lifeforms. But not always those things go well. In the simulation “Genesis Planet Kit”  we are in power of a planet-generating machine, which builds small worlds by combining items like toy cars and a cup coffee and iron bars. But if you aren’t cautious, you could also create a tiny black hole in your room. Whoopsy-daisy!

Other games give you the oppurtunity to redesign an existing tiny planet. In the lovely weird toy “Balance” you can add so many rosa elephants, naked humans, cacti and flowers as you wish to your landscape, which might disturb the fragile balance of the place, but it’s fun either way. Or take the drawing game “WORLD Paint”: You can choose between several background images and place items in there, to create an absurde world. Want a cheeseburger under the sea in the near of a cute fish? No problem. Your imagination brings it to life. 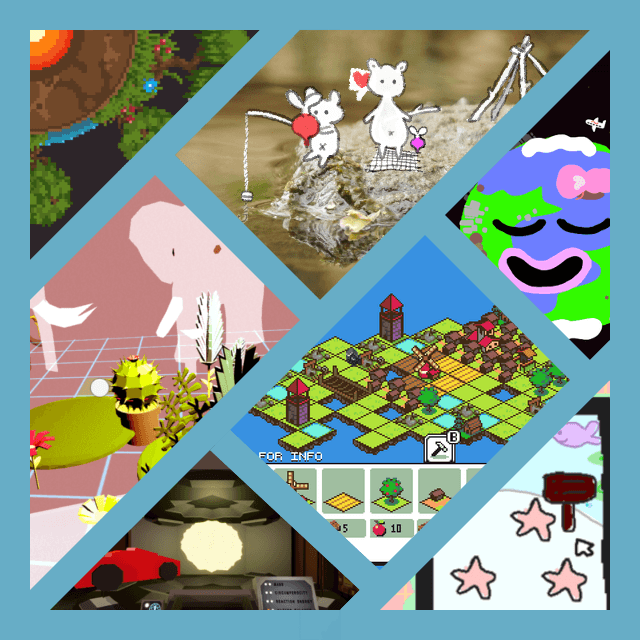 Many developers also tried to create a building simulation; the most polished one of them might be “Little Lands”. Here you have to build several structures like windmills, farms, houses and others to keep your population happy and to gather enough resources to build a ‘space ship’ to escape of your little floating islands. Usually such simulators take too much time to make in two or three days, but it seems that with the help of a theme like “A Small World” it’s possible, simply because you don’t have to invent too many building and interaction types anymore.

Generally spoken it means that having a smaller game world in mind can lead to creating a smaller, but still remarkable game experience, just because you can focus on the essentials. In this sense, “Our little island” was very minimalistic, but still effective. Here you have nothing else to do but to collect the branches and plants that your cute ‘monster’ brother fished out of the sea. By putting the branches together, you create your own little world, your new home.

Stacking to the top

Another very interesting trend can be found in the game mechanics. Some entries tried to stick with a horizontally fixed game world which could be expanded vertically by stacking stuff. Some of them follow a pretty simple concept, like the physics game “STACK”. Here you want to reach the forbidden floating islands in the sky, so you stack stuff like cardboard boxes, sofas, doors and tables on each other. The puzzle metroidvania “TINY” makes a cleverer usage of the stacking mechanics. Here you play as a super strong creature, which can stack whole buildings on each other to reach new unknown areas and puzzles.

Some of those games can be very tricky. Take “Therrain” as an example: In this game you have to defend your island and the structures from some kind of ‘acid’ rain. Whenever you fought off a specific amount of rain drops, you are able to build new structures to get nearer to the cloud. When you are near enough to it, you can slap it with your umbrella, which will make it go higher. Another great stacking game is “Path of the Rabbit”. Here the players have a fixed 5×5-tiled playground. Each turn they are forced to stack a new tile on one already existing field. This way can alter the path of the rabbit to lead it to oases or to new enemies. There are two basic problems, though: First of all, you can’t stack as many tiles as you want to on a field, which can make the whole area useless. The second problem is you can’t change the tile you have to place, which can make it very hard to create a working path.

A tale of snow globes and jars

But what happens with a game world, if it’s completely bordered? Many Ludum Dare participants thought of exactly such a world: A world in a container, especially snow globes. It seems like globes carry a magical aura with them. They allow to tell stories which are just possible in such a scenario, and that way many narration-based games and toys were created.

“Glass Houses” for example tells the short story of the uprising of a violent religion, right after a crack in the globe happened. Meanwhile a little girl finds comfort in a snow globe in “Snowed In”, (which has a masterfully executed voice-over, by the way!) after she was jinxed into it.

But some of those games want to evoke the players imagination. They don’t tell one story, but they give narrative splitters to a bunch of them! In “Globe” you have to click mysterious buttons to get to see something, while in “Scenes in a Globe” you just have to rotate the tiny audiovisual toy to get involved in the atmosphere of a farm, a desert or even the whole universe. It’s amazing. 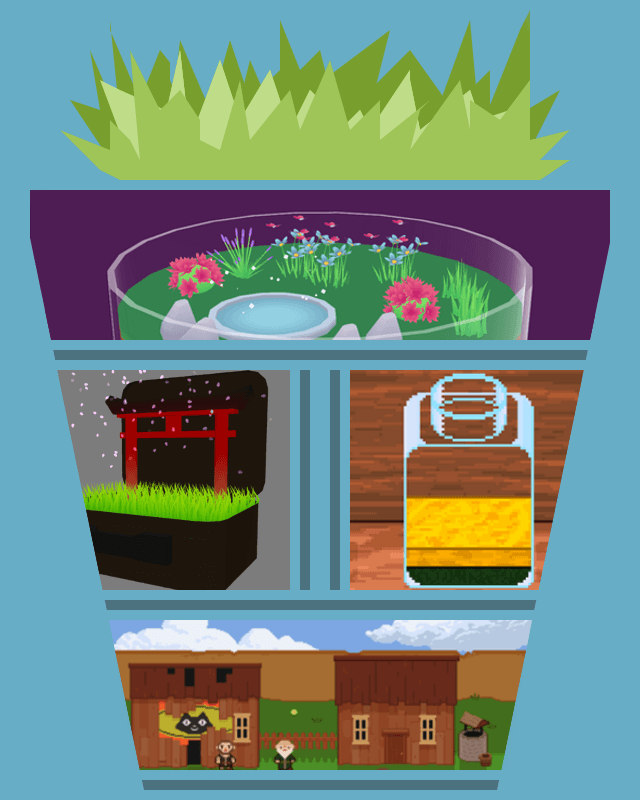 But snow globes weren’t the only choice, of course. In “Tiny Worlds in Flasks” you are allowed to build your own world in petri dishes and bottles, while “Bon Voyage” invites you to several trips in a little suitcase, where you have to collect stickers so you can adhere them to it.

Another kind of container was a cardboard box: In “[BOXAVERSE]” you find a small magical box where tiny humans live in it, but they are evolving much faster as we do. The first day they are in the Stone Age, the second day they live in the Middles Ages and the day after they live in the future. Each scenario is filled with new puzzles, so that you can help them out.

I also adored the puzzle game “A World in a Jar”: Here you have to mix several kinds of soil and seeds with each other to create new plants. It made me thinking about all the possibilities and potentials of such a small space, of all the things that can be created in it.