This is the fourth installment of “Game Jams with James”: Chats with developers about game jams, games from jams, and short-form games. To find our other game jam chats, check out the tag: #gamejamswithjames.

For our fourth “Game Jams with James”, James is talking with Julius Fondem, a colorful and smile infused game producer who has worked on games ranging from small to big, and from mobile F2P to console AAA. Julius also makes short-form games on his own time which can be found on his itch.io page.

Julius: I think short-form games are very interesting, and can be more expressive and thought provoking than longer-form games. As I have a job, and other hobbies in life, I really appreciate the fact that I don’t have to invest tens or even hundreds of hours of my time to fully experience a game. I also think that due to the short nature of short-form games, more emphasis can be put in the quality of the game, versus quantity, which can help drive home whatever point the game is trying to get across.

James: Given that we’ve talked about self-care when it comes to game creation and crunch, do you think there is a relationship between consuming short-form games and self-care?

Julius: Hmmm, I’ve never thought of that relationship before but I think there can be. A short-form game is a small bit size experiences so there is little pressure to complete it since the time investment isn’t huge. Also the topics that short-form games can cover can be crafted more towards self-care since there is rarely a huge business pressure set on short-form games. Then again people also talk about multiplayer games like “Overwatch” or “Destiny” being self-care in a way for them to relax and get lost in a game. I guess this whole thing isn’t limited to short-form games.

Video of “Trials of the Blood Dragon” – a game Julius Fondem project-managed.

Julius: My favorite game jam has to be Global Game Jam because it’s the first game jam that I took part in, and I love the global buzz that it generates each year. People at Global Game Jam are great and the atmosphere is filled with good vibes and creativity. Also, a game jam I really enjoyed was the Wooga Game Jam, which Berlin based Wooga organized at their office. They flew people in from around the world and we stayed at their office the whole weekend jamming. We had very relaxed and fun loving atmosphere in our team, which resulted in us laughing a lot and having a blast at the game jam. You can read more of my thoughts on it here.

James: It seems like the uniting ability and universal reach of game jams are aspects that draw you to them. How do you think this affects the experience of a jam when compared to simply weekend working?

Julius: Game jams usually have a very specific focus or goal in mind. You aim to finish something that weekend (or whatever time frame) which gives everything clarity. This brings people together in a way that helps them unite their abilities. I don’t think that this is something that is inherently not present in working on the weekend but usually when we do that we are working towards a larger goal which is further away so the same kind of focus and clarity isn’t quite there. Of course if you’re working towards a big deadline which is right around the corner (e.g. an event) then this same kind of focus can definitely be present. The universal reach of game jams is something that I find is definitely lacking in the experience of working on the weekend because after the game jam is over your game typically goes somewhere others can see it, and for bigger jams like Global Game Jam, the other jammers will also see your game. When working the weekend, you typically just see your work with your team and maybe the world will see a small glimpse with a #screenshotsaturday.

Julius: The one that immediately comes to mind is “Hyper Manly Rainbow Chesthair Shooter”, which is a shmup where you move your character with a dancepad and shoot different colored bullets with a Guitar Hero controller. The idea was just so bizarre and crazy when I heard it that I was highly intrigued. After trying it, it was just as hectic and crazy as I imagined. I don’t think anyone else in the team has a Twitter, but Samuli Jääskeläinen can be found on Twitter here.

James: I’m always interested in the backstory of games and how it alters the way we perceive the final work. How does the jam aspect affect how you view the game?

Julius: I think it does especially for the games that I see during the process of the jam because I can see how the game develops during that short amount of time and how the vision comes to life. Also I’m usually more accepting of flaws in jam games since I know they are supposed to be crude.

Julius: That would have to be “From Within”, which I made at last year’s Global Game Jam. It was the first game that I made completely by myself and I was using Twine for the first time. I’m very proud of myself for being able to make a small interactive story in one weekend, and I’m happy with the results. The game also showed me how easily an interactive story’s scope can get out of hand because I had originally planned for the story to be much larger, but then cut it down to be shorter.

James: Congratulations! There’s nothing like the feeling of solo developing a game, much less with a new engine too! How do you think the jam affected the outcome of this double accomplishment?

Julius: Thank you! You’re certainly right! I think the jam gave me a clear time box within which this had to come together. If I had worked at it alone, I might’ve gone with the larger scope of the story and never finished it because I would’ve been overwhelmed by the amount of work. Also it helped me focus to work on the game because if I would’ve done it after work in the evening, the sense of progress would’ve been slower and I might’ve dropped it all. In a weekend I was able to realize the whole thing and that would’ve been harder to keep going during a longer period of time with smaller bursts of work. The framework of the game jam helped keep me focused and motivated for a small sprint. 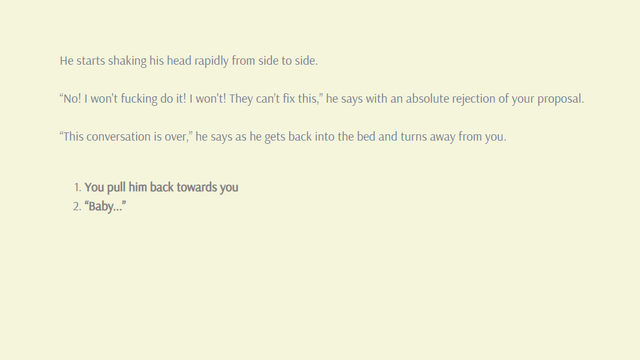 Screenshot of “From Within” – game by Julius Fondem.